What is the Knowledge-based Economy? Concepts and Lessons for the Middle Eastern Countries
Next Video 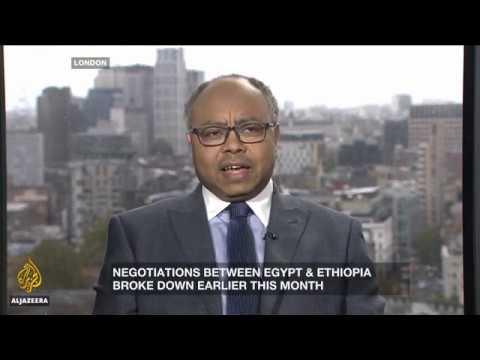 Environmental, socio-economical, legal and political perspectives of the Grand Ethiopian Renaissance Dam
Inside Story – AlJazeera English TV
Water is often said to be the source of life, and it is increasingly becoming the source of conflict in various parts of the world.
The building of the largest hydroelectric dam in Africa has reignited a dispute about its longest river, the Nile.
Ethiopia says the $5bn Grand Ethiopian Renaissance Dam near the border with Sudan will be a massive boost to the economy.
Egypt fears that will be at its expense, and reduce its share of Nile water.
Egypt has condemned comments from Ethiopia’s Prime Minister Abiy Ahmed – this year’s Nobel Peace Prize winner – that the dispute could lead to war.
So how should one of our most vital resources be managed?
Presenter: Hashem Ahelbarra
Guests:
Ahmed Almufti – former Sudanese negotiator, Nile Waters Agreement
William Davison – senior analyst on Ethiopia, International Crisis Group
Allam Ahmed – professor of knowledge management and sustainable development, University of East London
The mission of the MEKEI research institute is to use research and education to help transform the countries of the Middle East and North Africa to advanced, knowledge-based societies led by sustainable innovation and social advance.
Many consider the Middle East and North Africa (MENA) region as one of the most important emerging parts of the world economy in the 21st century. MENA is strategically vital as it produces the majority of the world’s oil. However, despite the region’s oil, most MENA countries score lower on Human Development Index (HDI) world ranking, with GDP, productivity and investment rates well below the global average. It is, therefore, becoming widely accepted that the dominant economic model of the region – based on the public sector, oil incomes and workers’ remittances – is not up to the challenges of modern globalisation and the needs of advanced knowledge-based societies. Given the apparently contradictory needs of economic growth and environmental conservation, it comes as no surprise that knowledge management, innovation and sustainable development (SD) have had such a powerful influence in contemporary discussions on the future of the region.
Knowledge Management Knowledge Economy Leadership Change Management Transformation
Algeria
Bahrain
Egypt
Iraq
Jordan
Kuwait
Lebanon
Libya
Morocco
Oman
Qatar
Saudi Arabia
Tunisia
United Arab Emirates

What is the Knowledge-based Economy? Concepts and Lessons for the Middle Eastern Countries